(and meeting with Goddess Kundalini)

♥  Please enjoy an overview of my life and how I came face to face with a powerful force that, for now, I am simply calling "goddess kundalini"  ♥

As with many children, I was very shy as a young child. The New England suburban world around me felt alien. I saw fairies and started a small club in First Grade to convince my girlfriends of their existence. During school lunch hour, I became the playground "tour guide," showing kids where the fairies and elves lived amongst the flora outside.

When I was 16, I found a book in a dark, musty boutique that was all about the mystical hidden worlds. It was a Theosophy book by Alice Bailey. From then on, I could finally start putting some words to my experiences.

By the age 28, I was experiencing many unusual inner mystical experiences. I had moved to Marin County and found it difficult to hold a conventional job; so I started a highly unconventional non-sexual Geisha girl service. It was very successful, but did not last long because I soon gained a small inheritance. This allowed me to go back to meditation, yoga and inner experiences all day long... mostly in solitude.

Over the next 10 years, I continued the spiritual quest, traveled through India often, and learned many a fascinating thing.  At age 38, when the Gulf War broke out, I became very ill due to a spider bite, parasites from India, poor diet and too much purification fire moving through me. After a year of trying every possible diet and supplement, yet still dropping down to 83 lbs and death knocking on my door, I met two experts on the Raw Food hygienic lifestyle. I healed within weeks, becoming healthier than ever in my life. For many years since, I have been grateful for this natural diet.

At age 41, I started professionally to do a lot of bodywork. It was an outgrowth of my previous years of mystic inclinations... Three years later, I took many courses in order to have credentials and pick up some extra training. I got my Reiki Master Practitioner's License, Levels 1 & 2 of Healing Touch International, and credits in Syntropy International. I had also previously studied Shiastu and Feldenkrais to some extent, general Swedish massage and the Barbara Brennon courses on the Human Energy Field, along with several other expressions of the same. At age 33, I was in the Lucis Trust Arcane School and have studied the entire Alice Bailey blue book collection.

Taking all these courses was helpful, to some extent, in understanding what was already happening subtly and spontaneously for me. The truth is, my healing work has not really changed as a result of these outer studies. But I have an improved, more confident sense of how to describe it and understand it all now. Frankly, I think the best things in life are simple. It is more a matter of stepping out of the way...

I have also been a case study for Dr. Lee Sannella's book, "The Kundalini Experience: Psychosis or Transcendence."  Though very young, for a full 9  years, 1983-1992, I endured the most intense and remarkable primal energies. The phenomenon included wild orgasmic shaking (kriyas) - resulting in cosmic visions, hand and body gestures (mudras), bija mantras (speaking in Sanskrit tongues), dances with unseen forces (leelas & bhavas), and other forms of the paranormal.

Finally, the wild ecstasy and "dark night of the soul" subsided and left me with some gentle gifts of insight and healing. Looking back, I feel relief the fires are calm now and grace to have had those experiences which continue to this day in a more controlled, subtle fashion.

Kundalini fire is sometimes equated with transmuted sexual fire that rises up the body, instead of downward in the usual biological fashion. This kundalini is, perhaps, why I have a gift with regard to True Tantra.  Read a good book on Kundalini here..

For much of my life, I have been strangely celibate – not that I wanted that. Sex can be sacred, but we often fall into the simple "biology" of it.  In so doing, it can lose its powerfully cosmic quality and purity.  Like it or not, my body seems to "know" this and always holds to the higher road. As a result, I tend to share in the energies, rather than in the "home runs."  I'm focused on full body alignment.

Though sexual energy may be different than "Holy Spirit" or spiritual energy, it has value in terms of physical, emotional and mental health, without which spiritual health cannot happen. And, what if sexual energy or "primal energy" that's aligned with God energy or "Source" is, in reality, the most powerful magical invocation of all creation?  Then, surely, tremendous levels of purity and timeliness would be needed.

One thing I always see in my visions is the Garden of Eden. There are several interpretations of the Genesis story, and also of the Jesus and Mary Magdalene story.  Many mysteries there are... and, sometimes, when all is safe, mysteries are unveiled.

When upon your heart sun rays gleam

Through clouds of gloom and doubt,

The Lamp within shines throughout. 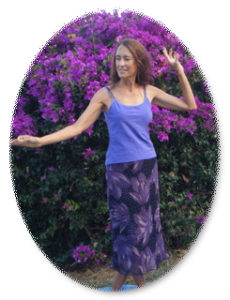 Lotuslamp is my Tibetan name,
given to me long ago, by Tantric Daka Kalu Rinpoche, in San Francisco, CA,
at the Kalachakra Initiation.
However, I am not a Buddhist, nor adherent to any one religion.